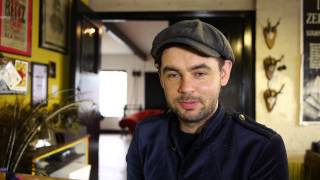 In previous posts, I mentioned the Discover Northampton promotional film that was played in the Royal & Derngate to open the Fashion show and exhibition event, in September 2012. The film was made by Kevin Stoney, a documentary film maker at Sole Studios, Northampton. Featuring in the film are, Steven Chown Chairman of Northampton Business Improvement District (BID), shop owners from within the (BID) area, members of the general public, and some of the local artists that wer

On Monday 1 October, the Discover Northampton grand finale exhibition and fashion show was a great success, at the Royal & Derngate. The exhibition was great, with artists and businesses set up side by side in the foyer, showcasing their work and what they have to offer. In the fashion show there were lots of amazing local designers with their Autumn/ Winter collections, as well as high street stores. A film was played to kick off the Fashion show, introducing the recent 'Dis